Jeff Schertz is a brilliant resource. Yes, I’m a fan. His recent post on getting the SoundPoint phones working under Lync was invaluable – and the extension dialling one even better!

I was actually quite impressed when I managed to get my sample IP650 working. Consultative transfer on a handset under Lync has to date been the exclusive domain of the Tanjay/CX700, and now I see it’s natively across the entire SoundPoint family as well. Nice job!

Other selling points for me include:

I thought I’d take Jeff’s posts a little further and see what else I could find or do with these guys… So, AU$110 later and overnight eBay sent me a 321 to play with.

Here’s a quick walk-through of what I had to do to get it working in my Lab.

First off, you’re going to need an FTP server to serve the necessary files to the phones. I went with Filezilla Server. I have an “Apps server” that my Lync utils live on, so it made sense that this was where I’d put Filezilla and the Polycom firmware and config.

If you haven’t yet, source the bootrom and firmware from here, copy them to the Firmware folder and explode.

While you’re downloading, grab XML Notepad 2007 and install it. That will come in handy shortly.

And if you’ve not been converted to the cause yet, please also download Notepad++. Notepad.EXE won’t correctly display the log files the phones write.

You’re going to want to short-dial to extensions from the phone (i mean, it’s a phone!) so we’ll need to tell the phone to use an appropriate Dial Plan (nee Location Profile) because it’s not quite clever enough (yet) to determine what the logged-in user’s is. Pick an appropriate Lync Dial Plan and note its “Simple Name”.

My Global is useless, and the one I normally use has punctuation in it, which is NOT permissible, so if you’re similarly afflicted, go ahead and change its SimpleName now. (You don’t need to raise a change request for this, trust me). Note the name for later.

Because Lync is all SSL-secured, we need to copy the Front-End’s root cert to the config file that the phone will suck. Jeff’s covered it off nicely here, so I’ll skim a little.

I assume you set Filezilla to run automatically, so run up the “Filezilla Server Interface” and connect to the local server (if prompted). If you chose the conservative option during the install, you’ll find it set to Manual in services.msc, so start it now please.

Click Edit / Users and create yourself a new user (I called mine Polycom), add a password, and give it permission to your Firmware folder like the below. In this environment the phones need to download (firmware – naturally) but also write back their config and log files, which we’re going to neatly tuck into sub-directories, hence the check against “+ Subdirs” below. 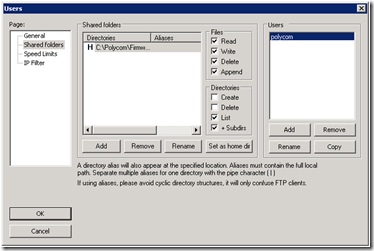 Under my Firmware folder I also created 2 sub-folders for the phones to put their logs and backups:

I wanted my deployment to follow a more centrally managed model with the username pushed to the phone, so I went with the configs offered in the monstrous 64M “UC_Software_Admin_Guide_v4_0_1.pdf”, but using Jeff’s tips.

Here’s the content of the “LyncSharedExample” file, with a couple of elements I’ve added:

Save this to a file called “LyncSharedExample.cfg” in the Firmware directory. Now open it in XML Notepad and we’ll add some necessary customisation: 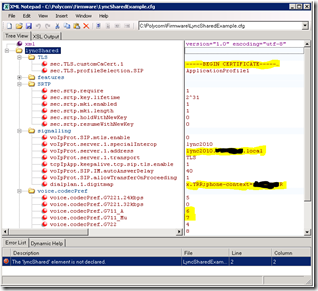 This file effectively becomes the template your Lync phones will use to find the certificate and the Lync Front-End.

Now we need to create another, and this file will be copied for every SIP phone in the deployment. I’ve used the provided “LyncPerPhoneExample.cfg” (again with a tiny addition of my own), but we’re not going to call it that.

Save the file in the same Firmware directory as above, as “phone-<the MAC address of the phone>.cfg”. Here that’s “phone-0004f22c0f27.cfg”. Now open it in XML Notepad.

This is what the file should look like now: 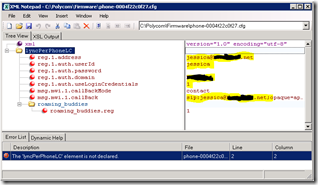 If you type ^N at this point you’ll be prompted to save the file, and it closes it (opening a new blank document). 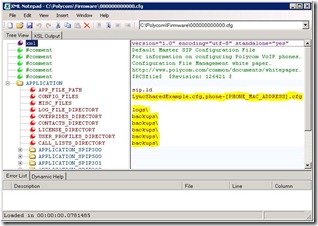 Step 1 is the sneaky one. Here we’re ensuring the phone first accesses the Master config file and NOT the default one customised for the phone. So when it fails to find <MacAddress>.cfg, it pulls <00etc>.cfg, and is then pointed to SharedExample where it picks up the Lync settings, and finally to the custom cfg file for each phone (“phone-<mac>.cfg”) that provides the domain and the user’s login name.

Save and exit XML Editor.

Plug the phone in and wait for it to boot. You might want to make a coffee as this will take a while if it’s new to the Lync firmware.

On my 321 I needed to take the following route to get to the config menu to tell it where to find the FTP server:

Menu / 3Settings / 2Advanced / 456Enter / 1AdminSettings / 1NetworkConfiguration then Down 3 times to reach the Server Menu, and follow your nose from here to select Server Type=FTP & give it an address. If you end up with letters or * when you press *, hit “#” until the top of the screen says “IP”. 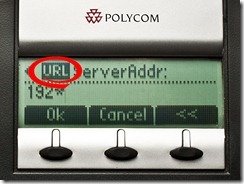 Keep going here to add the username and password you earlier set in FileZilla. “OK” when you’ve done, then back-arrow until you’re prompted to save config: 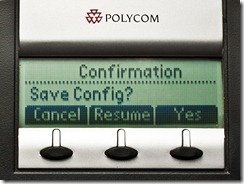 If the phone doesn’t automatically reboot at this point, back-arrow or press Menu to get out, then select Menu, 3Status, 1Basic, 4Restart Phone and Yes. (Other models have Restart on 6 or 8).

At this point, the screen on the phone cycled through a range of messages:

Once you make it through all of the above, you have a phone ready to talk to Lync, but it’s not yet authenticated. 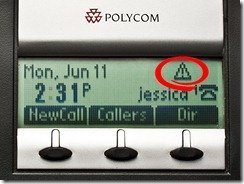 From the phone, select Menu / 3Settings / 1Basic / 4LoginCredentials. Press down/down/tick to move past the domain and username to get to the password field. Now’s about the time you curse if you’ve used some fancy characters in your password, because try as you might you won’t find them in the phone. (Press # to cycle between the keyboard entry modes). Anyways, after you’ve changed your password to something not-quite-so-complex and entered them into the phone, press the back-arrow. At “Confirmation – Login Credentials” select Yes and then back-arrow to the start. You might need *1* more reboot.

The obvious question arises: if the SoundPoint range includes full-duplex handsfree (as against the CX500’s 1-way “on-hook dialling”) from the outset, and it’s now integrated to Lync, why would you bother with the 500, or possibly even the 600?

The answer isn’t as simple. Each has its strengths. The 500 is visually consistent with the 600, and the tight admin and firmware integration both enjoy with Lync can’t be matched. In the Aries’ favour is the PIN-based login, and the fact that it doesn’t require any Lync licence to use it (if configured as a common area phone).

There are a few other strikes against the SoundPoints to take into consideration:

There are a few things still on the to-do list, and I’ll try to get to them soon:

The SoundPoint range is a broad family of SIP handsets that you can now re-birth for Lync. If you have stacks of them (say you’re migrating to Lync from a SIP Centrex service) then you stand to save a fortune by not having to replace them. If you’re very price-sensitive and buying new devices, the savings made here (compared to the ‘official’ Aries devices) will potentially justify the additional administration costs.

This is the first firmware release for the SoundPoint for Lync, and their appeal can only improve when Polycom knocks some of the rough edges off the user interface. I look forward to the next update. For the time being though, my IP321 is in the “keeper” category.

HERE’s my 23rd September 2012 update, with daylight saving time settings, Hotline (aka PLAR) and how to customise the tones for Australia.