I encountered an interesting situation this week where a user’s calls wouldn’t sim-ring. All of the evidence said it was active, but it just wouldn’t happen; there was no attempt to initiate the sim-ring leg when an incoming call arrived.

Sim-ring remained visible to the client, was captured in the XML in his client’s Lync-UccApi-0.UccApilog, and all looked good via the dreaded SEFAUtil. We could remove and reinstate it repeatedly to no avail.

I should mention that it’s working OK for others in the office, so it’s not going to be some system-wide issue like bad gateway config.

I’ve seen strangeness like this before that turned out to be related to the mobile client, so I ran the indispensable Get-CsConnections.ps1 to see how many client devices he was using. This gave me my most interesting clue so far: everyone else in the office is on the Office 2013 client – this dude? 2016!

As he’s the only one in the office on client “16” I asked him to disable the sim-ring, sign out, move to a “15” version of the client, sign back in, re-establish sim-ring and test. Nope.

I then compared his account in Lync to one of those for whom sim-ring is working. They had different voice policies, each with custom sim-ring pstn usages:

Alas, changing his voice policy to align with his colleague wasn’t the fix either.

By this stage I’ve decided it’s definitely corruption somewhere, so I flipped him briefly to the other FE they conveniently happen to have in their Topology and back again. That’s my ‘go-to’ fix for all sorts of user-specific strangeness – but it wasn’t going to be the cure this time.

It was about now that I stumbled across this error in the Front-End’s event log, confirming (at least as far as I’m concerned) that it’s definitely due to Office 2016: 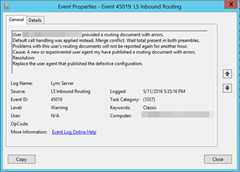 I only had a couple of tricks left up my sleeve:

And so it came to pass that I had to play my last card. Deleting him from Lync and re-enabling him was the fix. I never like doing that – it’s a bit of a sign of defeat from a diagnosticians perspective – but I guess this is today’s IT: so I just turned him off and back on again.